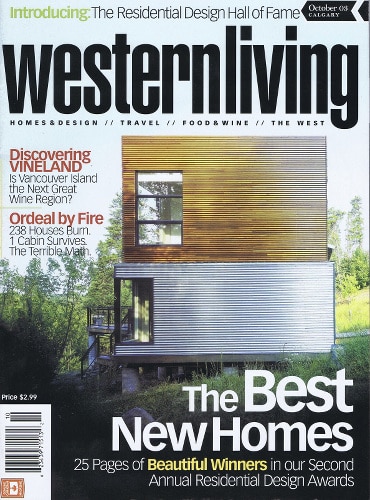 A seasonal residence on a lake in northwestern Ontario impressed our judges with its studied simplicity.  An antidote at last to the Lincoln Log look?

This stunning cottage on a lake in northwestern Ontario was built for a Calgary couple who fly in, mostly during the summer.  For Sturgess Architecture that meant a house that focused on place and holiday experiences.  With no immediate architectural context to consider, the design team turned for inspiration to the site itself…Use of piles to protect the landscape…made sense for a rocky, uneven section of the Canadian Shield.  Initial plans for an all-metal exterior were enhanced…by the use of wood, which creates a warm counterpoint.

A mere six metres wide, the home stretches out for more than 25 metres when the detached guesthouse is included.  The long narrow form allows for greater penetration of light and ventilation…Here in order to create cosy spaces as well as larger ones for gathering, eating, entertainment and cooking, corners were eliminated and individual areas defined with detailing.  The north wall is used for storage and the entire south wall is a two-storey bank of windows overlooking the lake.

(Even the bathroom) relates spectacularly to the lake-dominated landscape.  A window wall gives an illusion of openness, and the extensive use of ripple-textured, dark grey-green slate is inspired.  A painted glass mirror and wall separate the shower and sink areas, but the two rooms are linked by a long window bench and the pale green Corian counter that wraps around the sink wall, extending into the shower itself.

A sheltered outdoor space at the entrance separates the two buildings (main and guest house) and serves as an inviting outdoor room.  The vertical guesthouse is less than three metres wide.  It has a small living space on the main floor with bathroom and bedroom “in-the-trees” above.

Design awards judge Adele Weder says, “This project is really clean, simple and light on the land.  It reads like a Japanese temple, the way the doors glide open and the windows frame views of the surrounding nature.”

“This was the easiest category to judge,” adds Richard Lindseth.  “We especially liked the exterior—simple, clean and modern, a contemporary interpretation of cottage that doesn’t resort to log-cabin idioms.”

–excerpted from text by Anne Suche