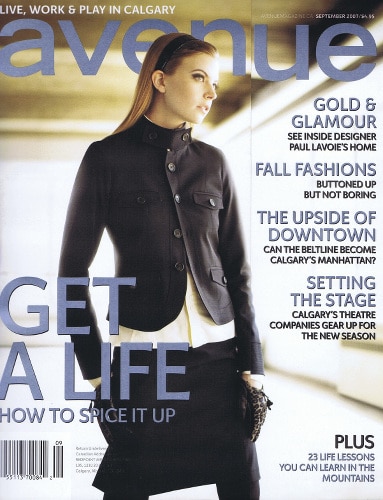 When Carol and Ward purchased their home in the summer of 2003, they knew they were going to make some changes. The home had been renovated before and had evolved from a 1930s rectangular bungalow into a lofted two-storey design with one main-floor bedroom and a master and three bedrooms upstairs.

“Originally, our vision was to add another 800 square feet to the front of the home—essentially two boxes on top of each other so that all of the children’s bedrooms could be upstairs,” says Carol.

The couple hired Sturgess Architecture to assist them with the project.  The firm had designed a rear renovation in 1996 for the previous owners and Carol and Ward wanted a seamless integration.  “It was important that the house not look like a bunch of renovations tacked onto one another,” says Kirsten Dow-Pearce, designer at Sturgess who is currently on maternity leave.  “We wanted to create what would look like a singular design.”

With three young children and a Labrador Retriever, this busy family required a home that was well laid out, functional and very family friendly.  They had moved from a very traditional Arts and Crafts home in the same area and the new home offered something that was more casual with usable spaces.  In a nutshell, everything had to be kid-and dog-friendly.

Keeping this in mind, the Sturgess design team created a flowing design that included two children’s bedrooms complete with a Jack-and-Jill ensuite upstairs, and a large study and feature entranceway on the main floor.  The existing great room at the front of the home was opened up to double height and the dining room was moved from a side hallway to the central room of the home.

“We achieved cohesiveness though material finishes and colors,” says Dow-Pearce.  Concrete and limestone were utilized in the fireplace surround as well as in the feature dividing wall in the master bedroom.  Blocks of cherry millwork encase the luxurious dining room, concealing a secret door that leads to the garage.  Signature walls clad in russet red paint anchor the cherry millwork and create continuity through to the living room and kitchen.  Dark stained oak hardwood gleams throughout the home blending the levels and the various renovations together.

On the main level, colorful artwork provides a visual punch to the neutral backdrop.  In the living room, a lively abstract of a First Nations powwow by Paul Van Ginkel covers the majority of the wall, infusing the room with red and gold.

Instead of moving out, the family lived in the home while the renovations evolved in stages around them—first the basement (a series of small rooms were opened up and the laundry room was moved upstairs), followed by the front addition and finally a major overhaul of the master bedroom.  “It is hard to imagine how much work is involved in doing a reno,” says Carol.  “When it gets close to the end you get pretty impatient because you think it is almost over, but in reality it isn’t—there are still all of the finishing details to complete.”

But when asked if the hassle of the renovation was worth it, Carol responds positively.  “This is a great house.  It is a lot of fun to live in.”

So you’ve found the perfect home, but it needs a little work.  Here are some helpful renovating hints from designer Kirsten Dow-Pearce to ease the stress and crate a fabulous new space.

First of all, throw away the idea that renovating is always cheaper and faster than starting from scratch.  Be prepared both financially and emotionally for unanticipated challenges that result from uncovering the unknown.

If you are going for a seamless look, don’t try to stick a square peg in a round hole.  Undertake renovations that are in keeping with the original bones, structure and style of your existing home and seek professional advice if you are making big changes.

Create visual and functional flow by utilizing interior materials, finishes or styles that are cohesive.

Spend your renovating dollars on spaces that you will actually use as a family.  Examine your lifestyle and living patterns and take stock of what will make spaces more usable.

If your family is young, then use materials that conceal the dirt and mess.  Consider microfibres, leather and patterned upholstery.  Materials like patterned linoleum flooring and undermount sinks make clean up easy.